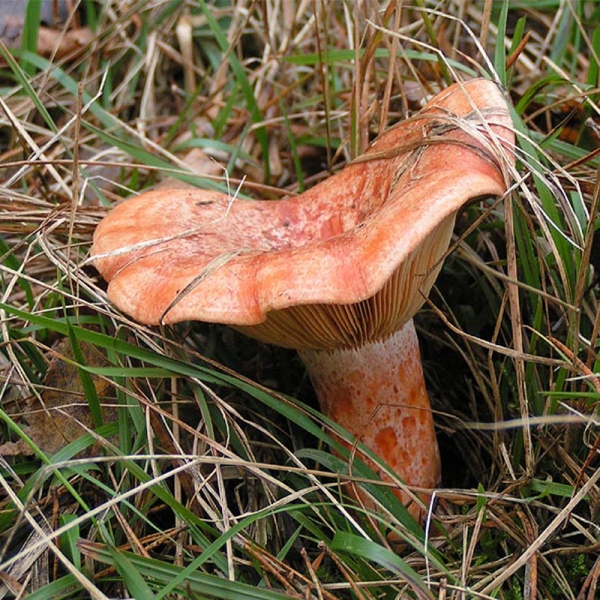 Lactarius deliciosus, commonly known as the saffron milk cap and red pine mushroom, is one of the best known members of the large milk-cap genus Lactarius in the order Russulales. It is found in Europe and has been accidentally introduced to other countries under conifers and can be found growing in pine plantations. A fresco in the Roman town of Herculaneum appears to depict Lactarius deliciosus and is one of the earliest pieces of art to illustrate a fungus.

Lactarius deliciosus has a carrot orange cap that is convex to vase shaped, inrolled when young, 4 to 14 cm (1.5 to 5.5 in) across, often with darker orange lines in the form of concentric circles. The cap is sticky and viscid when wet, but is often dry. It has crowded decurrent gills and a squat orange stipe that is often hollow, 3 to 8 cm (1 to 3 in) long and 1 to 2 cm (0.5 to 1 in) thick. This mushroom stains a deep green color when handled. When fresh, the mushroom exudes an orange-red latex or "milk" that does not change color.