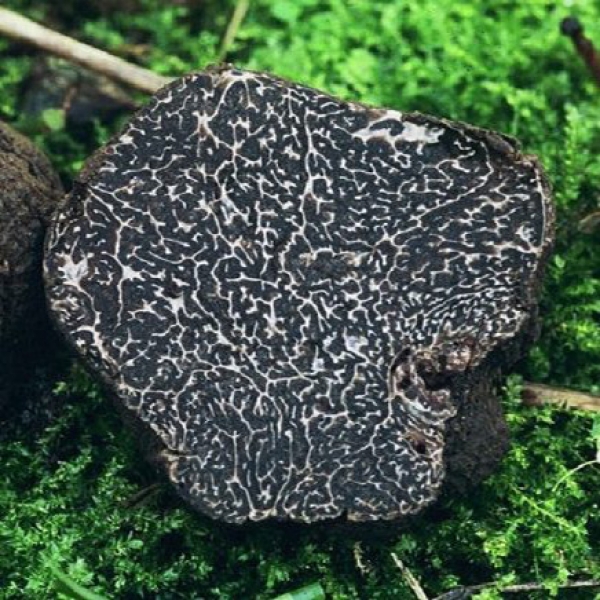 Tuber melanosporum, called the black truffle, Périgord truffle or French black truffle, is a species of truffle native to Southern Europe. It is one of the most expensive edible mushrooms in the world.
The round, dark brown fruiting bodies (ascocarps) have a black-brown skin with small pyramidal cusps. They have a strong, aromatic smell and normally reach a size of up to 10 cm. Some may be significantly larger, such as a black truffle found 2012 in Dordogne with a mass of 1.277 kg.

Their flesh is initially white, then dark. It is permeated by white veins which turn brown with age. The spores are elliptical and measure about 22–55 µm by 20–35 µm. They are dark brown and covered with large spikes.
Aroma

The fruiting bodies of the black truffle exude a scent reminiscent of undergrowth, strawberries, wet earth or dried fruit with a hint of cocoa. Their taste, which fully develops after the truffles are heated, is slightly peppery and bitter. If stored at room temperature, the aromatic compounds dissipate, while storage at around the freezing point (0 °C) leads to an increased synthesis of these compounds.

The volatile compounds that contribute to the aroma and are developed by the fruiting bodies include 2-methyl-1-butanol, isoamyl alcohol, 2-methylbutyraldehyde and 3-methylbutyraldehyde, as well as traces of sulfur compounds. One of these, dimethyl sulfide, is what attracts truffle dogs, truffle hogs and truffle flies to the fruiting bodies. Several species of yeast, which produce part of the aromatic compounds, have been isolated from Tuber melanosporum and Tuber magnatum.